The South Pole Telescope (SPT), in conjunction with observations from the Atacama Large Millimeter Array (ALMA), discovered a unique cosmic event of 14 galaxies packed in a region only three times the size of our Milky Way galaxy, taking place only 1.4 billion years after the Big Bang --- this is SPT2349-56.  We believe to be witnessing the birth of a massive galaxy cluster, hence we refer to this as a protocluster. The galaxies formed what is known as the brightest cluster galaxy (BCG), the oldest galaxy in a cluster, and subsequently more and more galaxies fell into the system.

(You can find the paper on arXiv here!)

In November 2017, Dr. Scott Chapman approached me about simulating the observed system for an additional 1 billion years after the observation in order to determine whether the system would indeed produce a large BCG.

The following visualization shows the initial condition of the highly idealized disk galaxies that I produced. I approximate each galaxy with a gaseous and stellar disk, in addition to a dark matter halo.  I then randomly sample positions within a sphere of radius 65kpc for each system, as well as randomly sample orientations of the disk spin axes.

In order to study the dynamics of the system we need initial velocities. I sample the bulk velocity of each galaxy from the observed distribution and assign this to the members at random. The following simulation shows one possible realization of the evolution of the cluster, for an additional 1 billion years after the observation.

Young stars are shown in blue, and older stars shown in red. Occasionally dust obscures the light from the stars during the collision.

Based on the above simulation these 14 galaxies smashing together do produce a large spheroidal system! In fact, the final state of the galaxy looks very similar to NGC 474 (shown below).  We understand the origins of the streams and shells through stellar dynamics, but perhaps this system was in a fact a mega-merger similar to SPT2349-56? 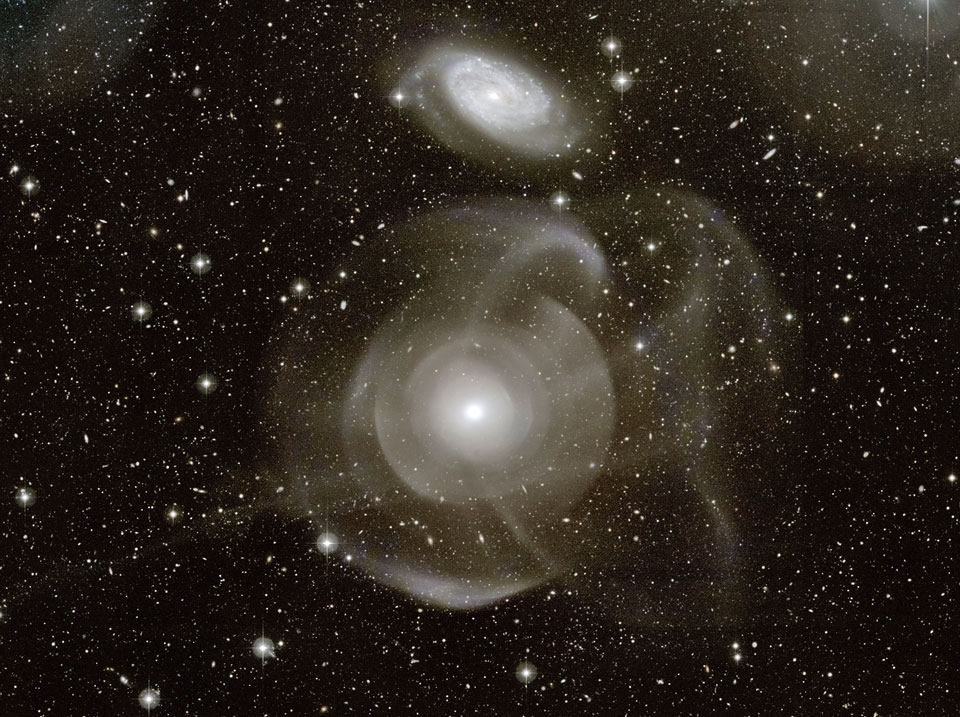 The most interesting result from these simulations is that an intracluster medium (ICM) builds from supernova explosions ejecting gas from the galaxies.  Below is a slice through the gas within 200kpc of the centroid, with temperatures shown in color between 100 000 K and 10 000 000 K! You can see shocks moving outward from the center as the gas rapidly mixes in the center.  Eventually over time, the gas extends 1 Mpc from the centroid and builds something very similar to the ICM.